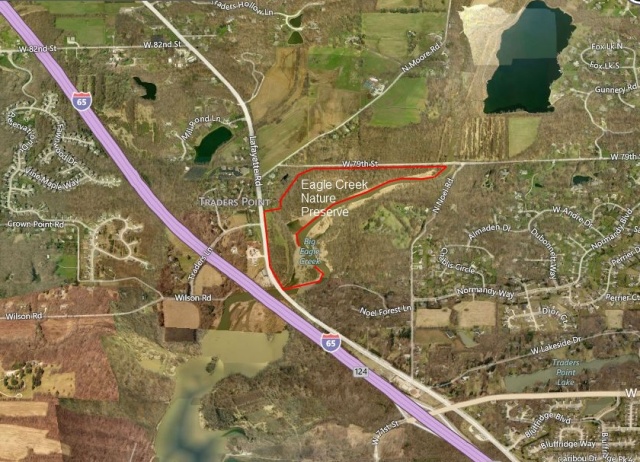 The Eagle Creek Nature Preserve near Traders Point was created when the Indianapolis Colts moved to Indianapolis.    But few know the full story that connects the Indianapolis Colts to a 100 acre nature preserve near Eagle Creek Park or the fact that the sensitive area was once slated to be mined for gravel.
In an Indianapolis Star article dated Tuesday April 15, 1980 we learn the Audubon Society chapter of Indianapolis demanded an immediate halt to the controversial mining operation on flood control land inside the park’s boundaries.   But the headline blared: “Gravel Firm Lawyer has Warning for City”.   Phillip H. Minton, attorney for U.S. Allied-Aggregates, said the firm wanted to mine gravel on some 80 acres of city-owned land north of the park along Eagle Creek.   Minton said the company signed an agreement in 1967 which states that mining can occur in the “Eagle Creek Reservoir Basin”.   The Indianapolis Department of Public Works had been seeking to negotiate an end to the mining but U.S. Allied had rejected the city’s proposal the previous week.   Minton said that if the city halted the mining with a court order, and U.S. Allied subsequently won the right to operate, the company would seek “substantial damages” from the city and the “entire Eagle Creek Reservoir basis will be excavated.”  Representatives of the Audubon Society were joined by the Sierra Club, the Indianapolis Garden Club and others critical of the existence of mining in  a park, saying it is damaging to wildlife habitats as well as being an eyesore.
On January 16, 1985 the Indianapolis Star reported the designation of land at the northeast end of the park as an informal arboretum and other land in that area as a preserved section, or wildlife conservation area.   In the same article the parks board approved a community park at the southeast corner of West 56th Street and Reed Road, next to the Indianapolis Colts training facility under construction.   What was not mentioned in the article was that the city had experienced a net loss of parks land in order to attract the Colts and that the director of the Parks Department was furious.
More than ten years after Minton’s threat, a very small article in the same paper (November 06, 1990), had the following notice: “On Monday the Public Works Board voted 3-0 to turn 111 acres of vacant land across from Eagle Creek Park over to the city parks department for use as a nature preserve.   The site is just east of Lafayette Road near 79th Street.   Eagle Creek administrator Steve D. Waltz said the city had tentatively agreed to the transfer in 1984 when the parks department gave up some land so a training center could be built for the Indianapolis Colts football team”.  The article did not mention the transfer came from the Department of Public Works, the group obligated to honor the mining agreement.   By transferring the custody of ownership the city had found a clever way to terminate their agreement with U.S. Allied-Aggregates.
I learned from a reliable source that Parks Department Director Art Strong was visibly upset with Mayor Hudnut when he learned the Mayor had offered park land to the Colts for their training facility.   Strong had fought hard to create more parks land for use by city residents and he was appalled that some of it was being used like a political football to benefit a privately owned business.  Although it took years to formally terminate the mining agreements and  transfer the public works department land to the Parks Department for a nature preserve, Director Strong’s desire to have no net loss of park land was realized.
Today the nature preserve is a pristine area unknown to most park visitors and naturalists.   Lacking a parking lot and direct access by trail to the primary park it is not easily accessible.   The area is home to a buried petroleum pipeline dating to the 1950s when Purdue University controlled the property.   The owners of the pipeline have a need for aerial surveillance of their line and this has necessitated a 50 foot wide cut of nature that visibly scars the area.   But that fact is lost on the beaver, deer, foxes, coyote and hawks that frequent the preserve.   Since the same pipeline extends south through Eagle Creek Park, the pipeline company will soon extend a similar swath cut through park land located on the west side of the reservoir.   In order to accommodate the naturalist’s concerns about the cutting through the woods,  the company has agreed to delay their cuts until later this year. 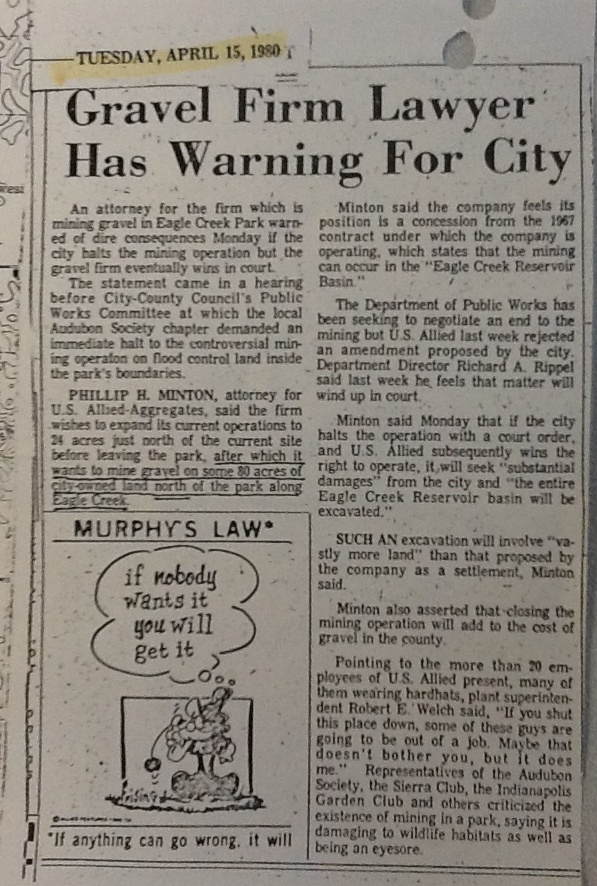 I am pleased you have expressed interest in learning more about the historic Traders Point area in Indianapolis, Indiana. From 1980 to 1982 I was employed in the PR department at Conner Prairie Museum in Hamilton County. There I learned about William Conner, an important figure in Indiana's pioneer days. A decade later I became interested in the history of the Traders Point area and was surprised to learn that William Conner had been the first land owner in the area. In 1823 he acquired, through the Federal land office in Brookville, a patent for an 80 acre tract carved by Eagle Creek and an Indian trail that was about to be named the first toll roadway through the township (Lafayette Road). Thirty years later a village took shape within this tract. A grain mill on the creek, houses, churches, stores, restaurants, and two gas stations would take shape here in the creek valley hamlet of Traders Point. By 1962 all improvements (except a farmer's co-op) had been removed by the Indianapolis Flood Control Board to make way for Interstate 65 and a new reservoir. This blog is dedicated to preserving evidence of this historic area but I will occasionally use it to discuss related topics. To activate this follow, simply click the confirm button below. If you don't want to follow, ignore this message and we'll never bother you again. I am also a member of the Old Pleasant Hill Cemetery, a non profit association still selling burial plots for those who would like to spend all eternity in Traders Point, and I am an officer in the Pike Township Historical Society and the Traders Point Association of Neighborhoods.
View all posts by Ross Reller →
This entry was posted in Area History, Distinctives, Traders Point in general. Bookmark the permalink.